Toronto, ON, October 15, 2018: The Sunburst Award Committee has announced the winners of the 2018 Sunburst Award for Excellence in Canadian Literature of the Fantastic in Adult, Young Adult, and Short Story categories.

The 2018 winner of the Sunburst Award for Young Adult Fiction is The Marrow Thieves, by Cherie Dimaline, [Dancing Cat Books] The Sunburst Jury commented:
Cherie Dimaline’s The Marrow Thieves is the story of young Frenchie, an Indigenous teen, and his companions, who are on the run from a society that wants their bodies — and their souls. The book brilliantly connects the legacy of residential schools to a dystopian post-climate-change future where only Indigenous people are able to dream. Dimaline’s novel reminds us of the power of storytelling and the importance of community, reinforced for the disenfranchised children by the wisdom of the heroic elder, Miigwans. The writing is painful yet beautiful, bleak but ultimately hopeful. In this era of reconciliation, Cherie Dimaline’s The Marrow Thieves is a work of speculative fiction that resonates and stays with the reader long past the last page.

Cherie Dimaline is an author and editor from the Georgian Bay Métis Community. The Marrow Thieves has already been awarded The Governor General’s Award for Young People’s Literature and the U.S. Kirkus Award For Young Readers. Her first book, Red Rooms (Theytus Books, 2007), won Fiction Book of the Year from the Anskohk Aboriginal Book Awards. Her novel The Girl Who Grew a Galaxy (Theytus Books, 2013), was short-listed for the 2014 Burt Award.

Submissions of eligible works published in 2018 for the 2019 awards are now being accepted.
See the Sunburst Award News Page for details.

The Copper Cylinder Award is an annual award for Canadian literature of the fantastic, selected by members of the Sunburst Award Society for books published during the previous year. It derives its name from what is considered the first Canadian scientific romance, A Strange Manuscript Found in a Copper Cylinder, by James De Mille (1833-1880). All winners of the Copper Cylinder receive a unique, handcrafted copper cylinder trophy.

The 2018 Copper Cylinder Young Adult Award is shared by two works, Scion of the Fox by S.M. Beiko [ECW Press], and Weave A Circle Round by Kari Maaren [Tor Books].

From the publisher of Scion of the Fox:
Roan Harken considers herself a typical high school student — dead parents, an infected eyeball, and living in the house of her estranged, currently comatose grandmother (well, maybe not so typical) — but she’s uncovering the depth of the secrets her family left behind. Saved from the grasp of Death itself by a powerful fox spirit named Sil, Roan must harness mysterious ancient power . . . and quickly. A snake-monster called Zabor lies in wait in the bed of the frozen Assiniboine River, hungry for the sacrifice of spirit-blood in exchange for keeping the flood waters at bay. Thrust onto an ancient battlefield, Roan soon realizes that to maintain the balance of the world, she will have to sacrifice more than her life in order to take her place as Scion of the Fox.

S.M. BEIKO currently works in the Canadian publishing industry as a freelance editor, graphic designer, and consultant. Her first novel, The Lake and the Library, was nominated for the Manitoba Book Award for Best First Book, as well as the 2014 Aurora Award. Scion of the Fox is the first book in her Realms of the Ancient series. 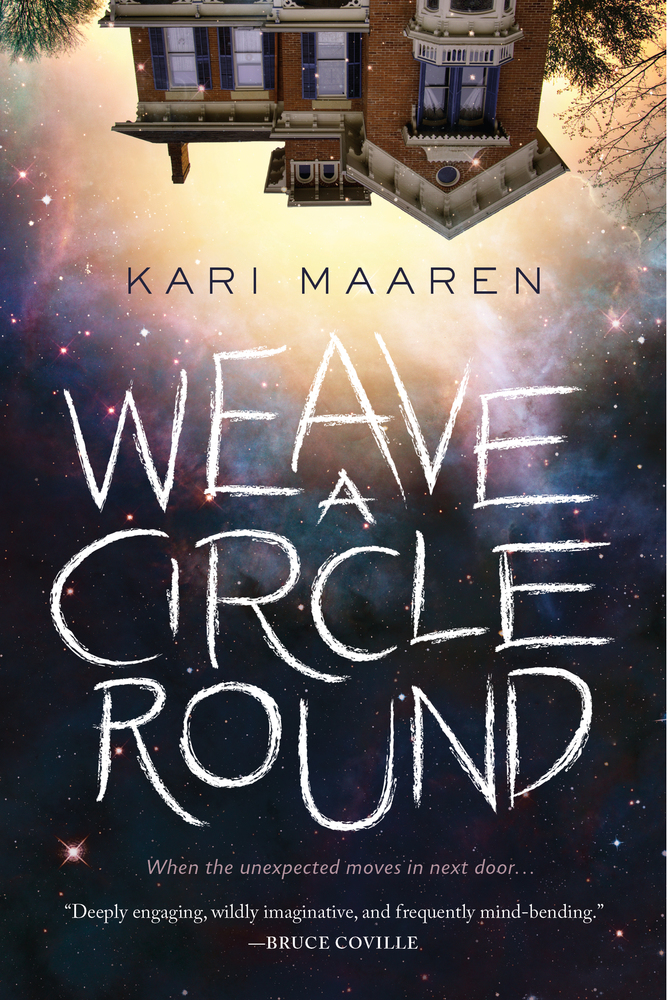 From the publisher of Weave a Circle Round:
Freddy doesn’t want people to think she’s weird. Her family makes that difficult though: her deaf stepbrother Roland’s a major geek, and her genius little sister Mel’s training to be the next Sherlock Holmes. All Freddy wants is to survive high school. Then two extremely odd neighbours move in next door.

Cuerva Lachance and Josiah definitely aren’t normal. Neither is their house, which defies the laws of Physics. Neither is Freddy’s situation, when she suddenly finds herself stuck thousands of years in the past with her very, very weird neighbours. And that’s only the beginning.

KARI MAAREN is a Toronto-based writer, cartoonist, musician and university instructor who likes writing stuff about monsters, and who gets unreasonably upset when her students abuse the common apostrophe. Weave a Circle Round is her first book. The Sunburst Award Society also confers the annual juried Sunburst Awards for Excellence in Canadian Literature of the Fantastic. Both awards celebrate the best in Canadian fantastic literature published during the previous calendar year.

The Sunburst Award takes its name from the debut novel of the late Phyllis Gotlieb, one of the first published authors of contemporary Canadian speculative fiction. Past winners of the Sunburst Award include Charles de Lint, Cory Doctorow, Gemma Files, Hiromi Goto, Nalo Hopkinson, Guy Gavriel Kay, Thomas King, Ruth Ozeki, and Geoff Ryman. For additional information about the Sunburst Award, the nominees, juries, as well as previous awards, eligibility, and the selection process, please visit the official website at www.sunburstaward.org.